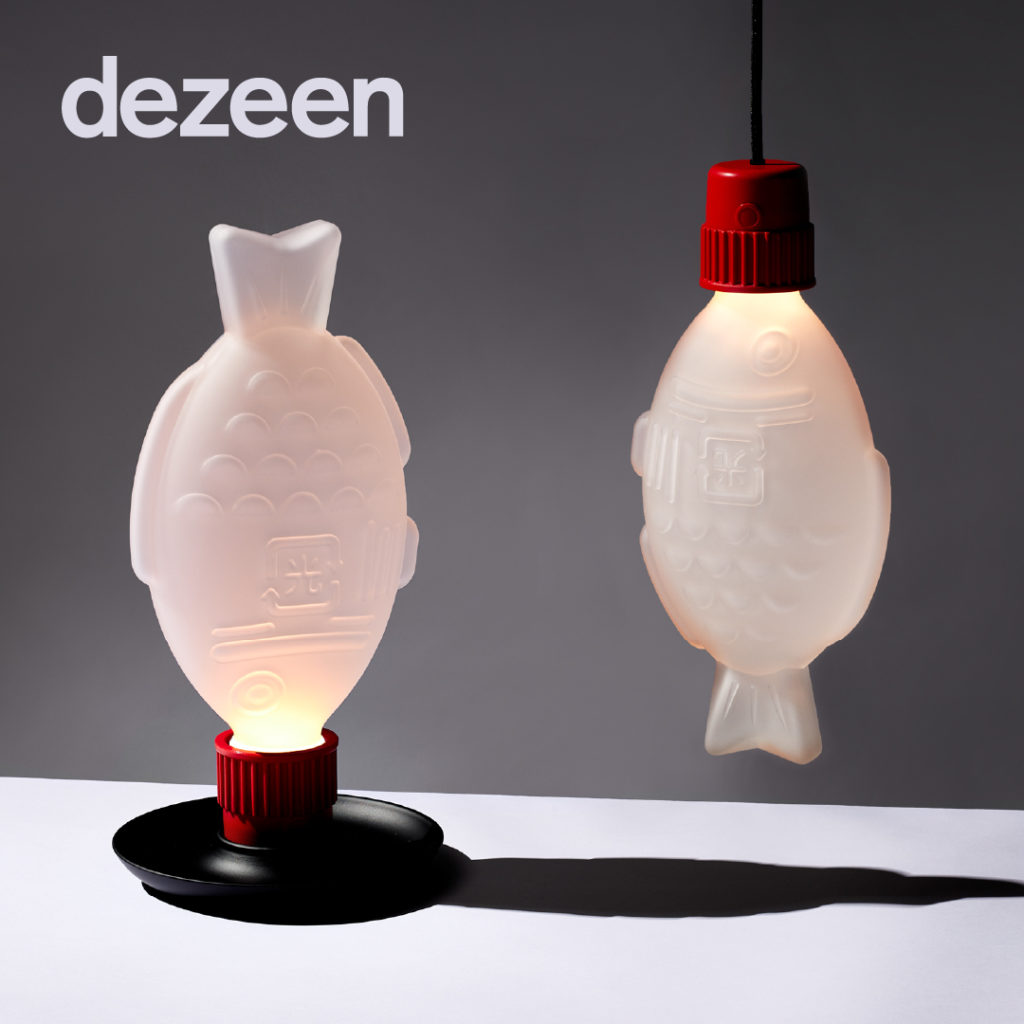 Australian studio Heliograf’s Light Soy lamps are designed to emulate the fish-shaped soy sauce bottles found in sushi shops, as a comment on the damaging effects of single-use plastic.

The idea for the Light Soy lamps was born after Heliograf founders Jeffrey Simpson and Angus Ware were shocked by how many of the disposable, soy sauce bottles they had used while eating sushi.

Update: Light Soy has been longlisted for the Dezeen Awards 2020 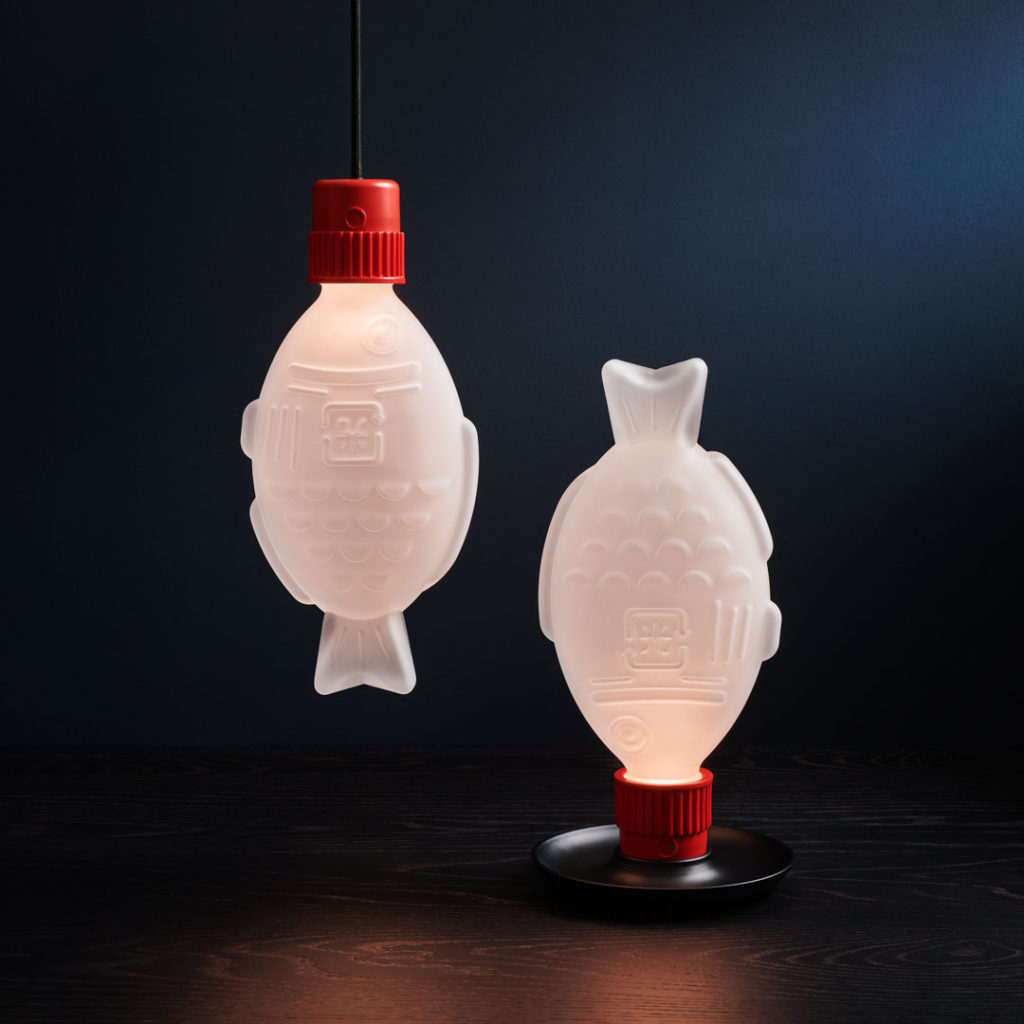 Like other single-use plastics such as straws and coffee cups, the tiny, fish-shaped packets can’t be re-used and are difficult to recycle, meaning most end up in landfills or the ocean.

Having both grown up by the coast, the Sydney-based duo struck by the irony that the plastic fish would eventually harm marine life. 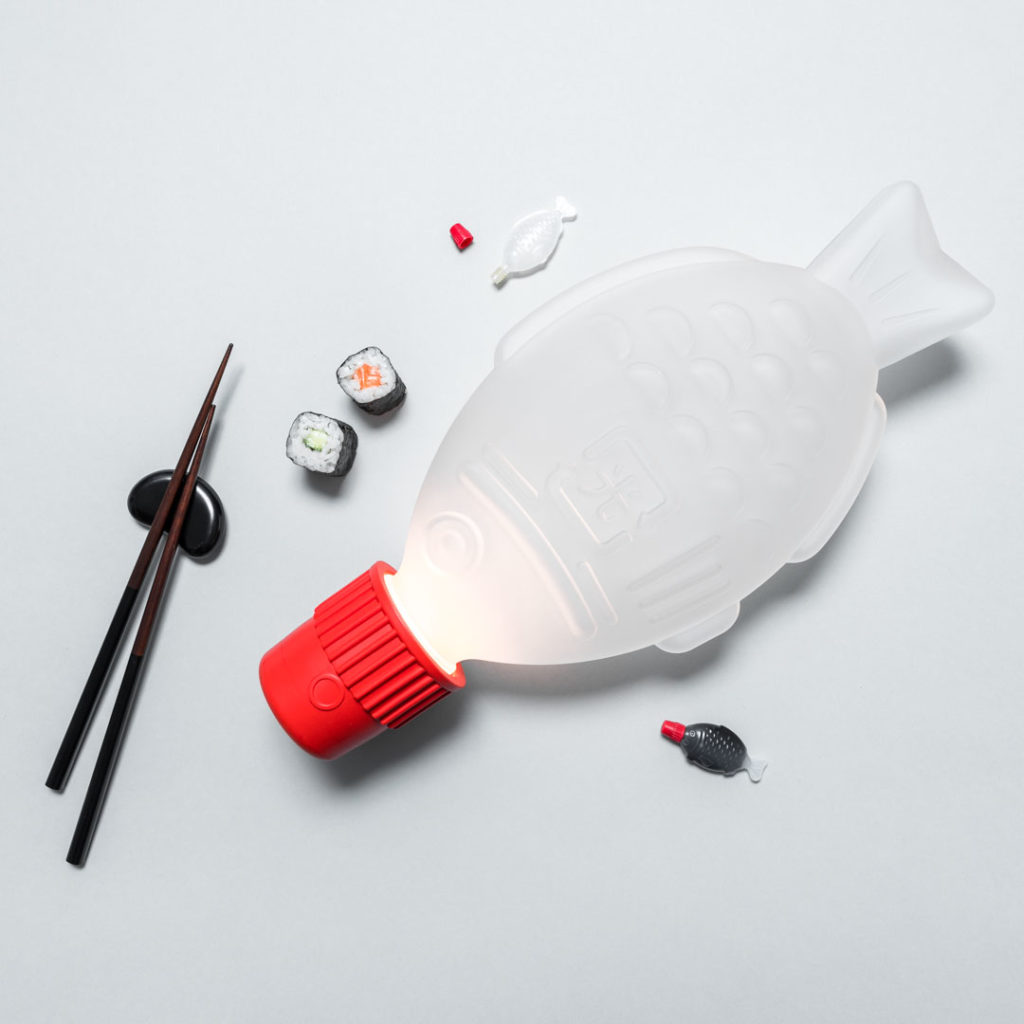 Modelled on these small, soy sauce containers, the Light Soy lamp is the designers’ way of highlighting the issue of single-use plastic and the impact it has on the environment.

“By taking a piece of rubbish, and dramatically scaling it up, we want to show that small things matter, and we need to make big changes to how we design everyday items,” said Ware.

“At every stage, from initial concept through to logistics, we have questioned how we can do better.” 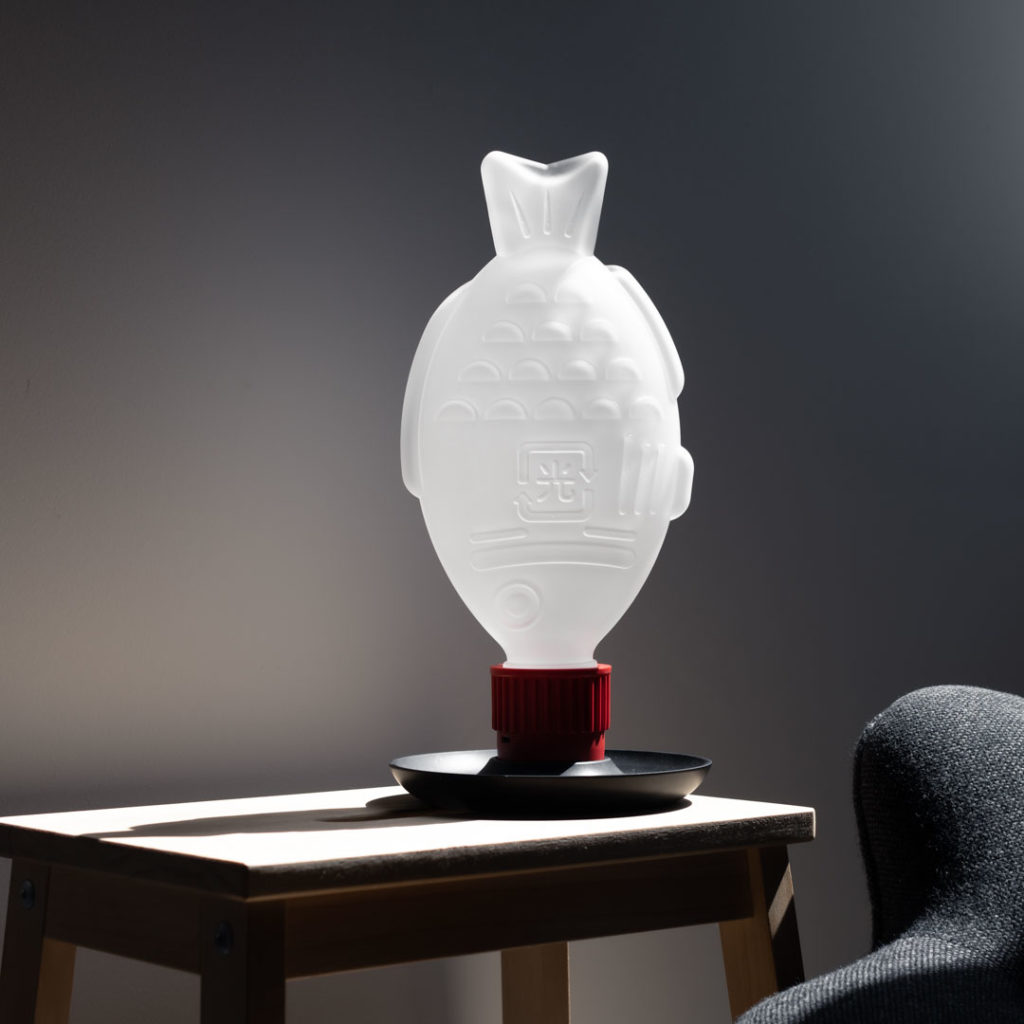 Heliograf worked with sustainable design studio Vert Design to develop a luxury product that would have a small footprint.

Durable and recyclable materials including borosilicate glass and powder-coated aluminium were used to make the Light Soy lamp, which has been etched to achieve a frosted finish. 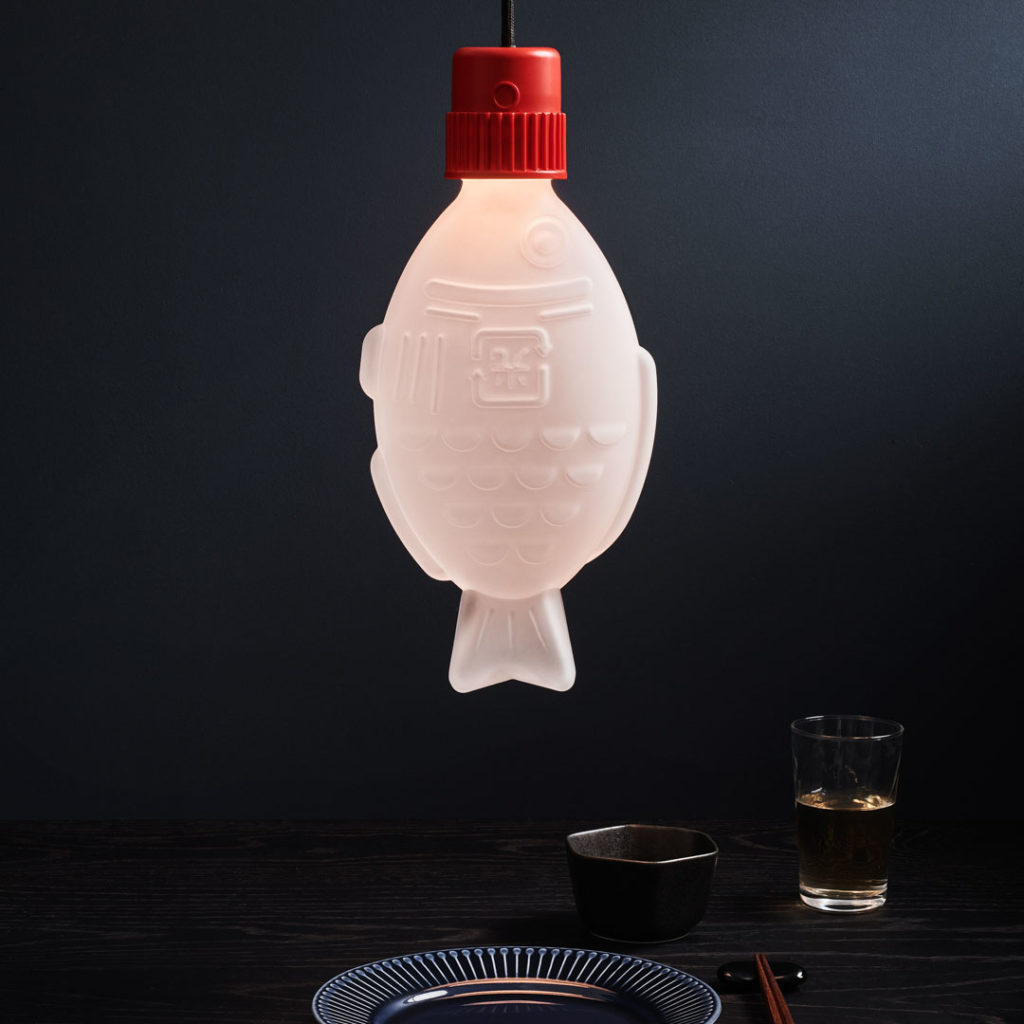 The lamp has taken over three years to produce, two years of which were spent perfecting the glass-blowing technique and developing the right surface finish.

“We chose to subvert our disposable culture by using premium materials and creating something that will be treasured, not trashed,” said Simpson.

In order to make the packaging for the light entirely plastic-free and biodegradable, the team chose to use moulded sugarcane fibre instead of polystyrene or plastic.

The lamp is available in two forms: a USB-C rechargeable table lamp or a pendant light. Both options have a built-in 3000K LED with touch-controlled dimming.

The Light Soy lamp is the first release in a collection of designs by Heliograf that take cues from small, everyday objects. Simpson says the studio has “big plans” for the future. 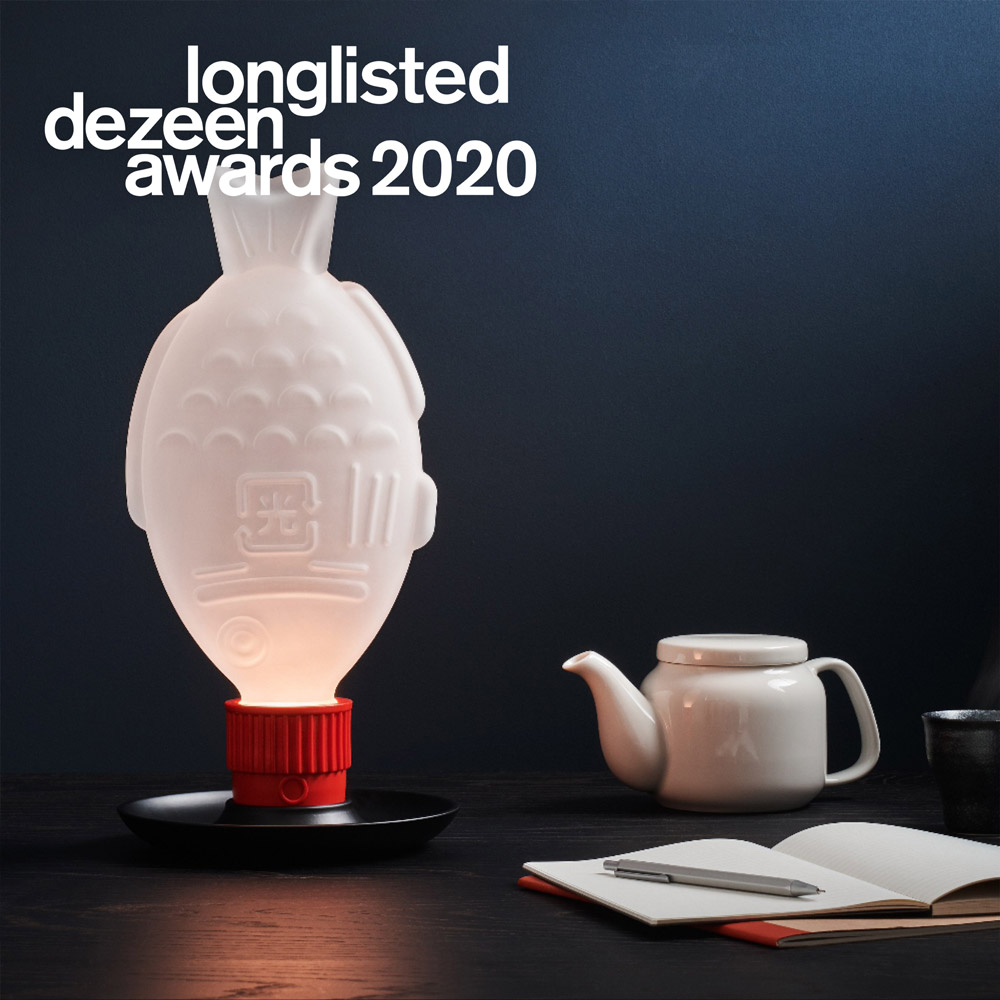 Heliograf an award-winning design collaboration of Angus Ware and Jeffrey Simpson, based in Sydney, Australia. We create playful and inspiring objects with sustainable design at heart.