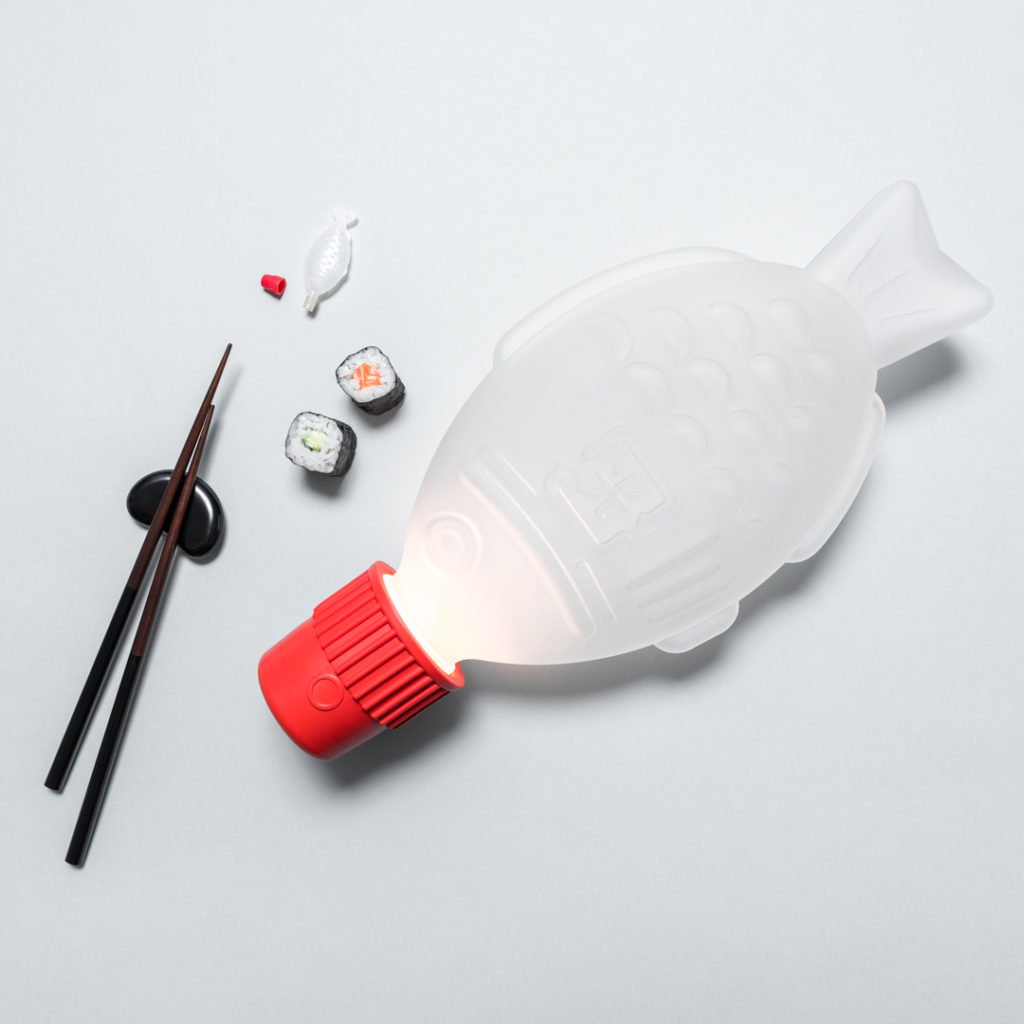 The big problem with the little soy sauce fish

The iconic soy sauce fish packets used with takeaway sushi are recognised throughout the world for their cute shape & convenient design. The containers, called shoyu-tai (soy-sauce snapper) in Japanese, were invented in the 1950s to replace glass or ceramic bottles, and quickly became a popular way to provide a single squirt of soy sauce with takeaway sushi. There are hundreds of different shapes, sizes and colours, so many that a Japanese scientist created a scientific taxonomy populated entirely with the different species and subspecies of plastic fish.

Unfortunately, along with other single-use plastics like straws and coffee cups, the packets are quickly tossed and difficult to recycle, so they end up clogging landfills or floating in the ocean. The tiny fish are a powerful symbol of a convenience culture that has had a tragic impact on our environment, particularly our oceans – a sad irony given their shape.

The tiny containers hold just 4mL of soy sauce. Eating just a few pieces of sushi might require multiple fish packets, each with a separate lid. They’re impossible to refill, so best-case they go into the trash and end up in landfill, worst case they get tossed straight on the ground. Beyond the environmental implications, this is a huge waste of energy and resources for a simple convenience.

They can’t be easily recycled

While they are made of a recyclable plastic, polyethylene, the packets are so small they fall out of recycling bins, trucks and can get stuck in sorting equipment. If they do reach the recycling stage, the fish packets are contaminated with soy sauce and other food, and made from mixed plastics, so the resulting plastic is less valuable and useful because it isn’t pure.

They pollute the ocean

The small packets are light and trap air, so they tend to get washed into drains, streams, then rivers and ultimately into the ocean. They float on ocean currents and travel incredible distances, slowly breaking down into smaller and smaller pieces until they eventually become microscopic particles that enter our food and water supplies.

They take 500 years to break down

Polyethylene is not biodegradable so the packets that are used for just seconds will remain in the environment for hundreds of years. Even ‘compostable’ plastics like Polylactic Acid (PLA) need to be composted in the right conditions and can still be harmful to wildlife before they break down.

Tragically, to seabirds, fish and other marine life, the packets look just like their normal food. Once ingested the plastics get stuck in their gut, causing the animals to slowly starve to death. Other plastic objects ensnare marine life, causing them disfiguring injuries or slowly drowning them as they struggle to escape.

We can design better

Ultimately these packets are a bad design, and they simply do not need to exist. There are many ways to avoid single-use plastics and the small convenience does not offset the massive environmental cost. We believe that better design – of individual products and entire product life-cycles – is necessary to eliminate plastic pollution. We need to completely reject single-use items and move toward a circular economy.

Read more about how to stop using single-use plastic with sushi .

We created Light Soy to be treasured and last, rather than being trashed. We hope Light Soy will highlight the big problem with single-use plastic and the impact design can have on people and the planet. We have committed to removing 3 kilograms of ocean-bound plastic from the environment for every Light Soy lamp sold.

This website uses cookies to improve your experience while you navigate through the website. Out of these cookies, the cookies that are categorized as necessary are stored on your browser as they are essential for the working of basic functionalities of the website. We also use third-party cookies that help us analyze and understand how you use this website. These cookies will be stored in your browser only with your consent. You also have the option to opt-out of these cookies. But opting out of some of these cookies may have an effect on your browsing experience.
Necessary Always Enabled
Necessary cookies are absolutely essential for the website to function properly. This category only includes cookies that ensures basic functionalities and security features of the website. These cookies do not store any personal information.
Functional
Functional cookies help to perform certain functionalities like sharing the content of the website on social media platforms, collect feedbacks, and other third-party features.
Others
Other uncategorized cookies are those that are being analyzed and have not been classified into a category as yet.
Non Necessary
Any cookies that may not be particularly necessary for the website to function and is used specifically to collect user personal data via analytics, ads, other embedded contents are termed as non-necessary cookies. It is mandatory to procure user consent prior to running these cookies on your website.
Analytics
Analytical cookies are used to understand how visitors interact with the website. These cookies help provide information on metrics the number of visitors, bounce rate, traffic source, etc.
Advertisement
Advertisement cookies are used to provide visitors with relevant ads and marketing campaigns. These cookies track visitors across websites and collect information to provide customized ads.
Performance
Performance cookies are used to understand and analyze the key performance indexes of the website which helps in delivering a better user experience for the visitors.
Uncategorized
Undefined cookies are those that are being analyzed and have not been classified into a category as yet.
SAVE & ACCEPT